The Illusionist article by John Fraim

The Illusionist article by John Fraim 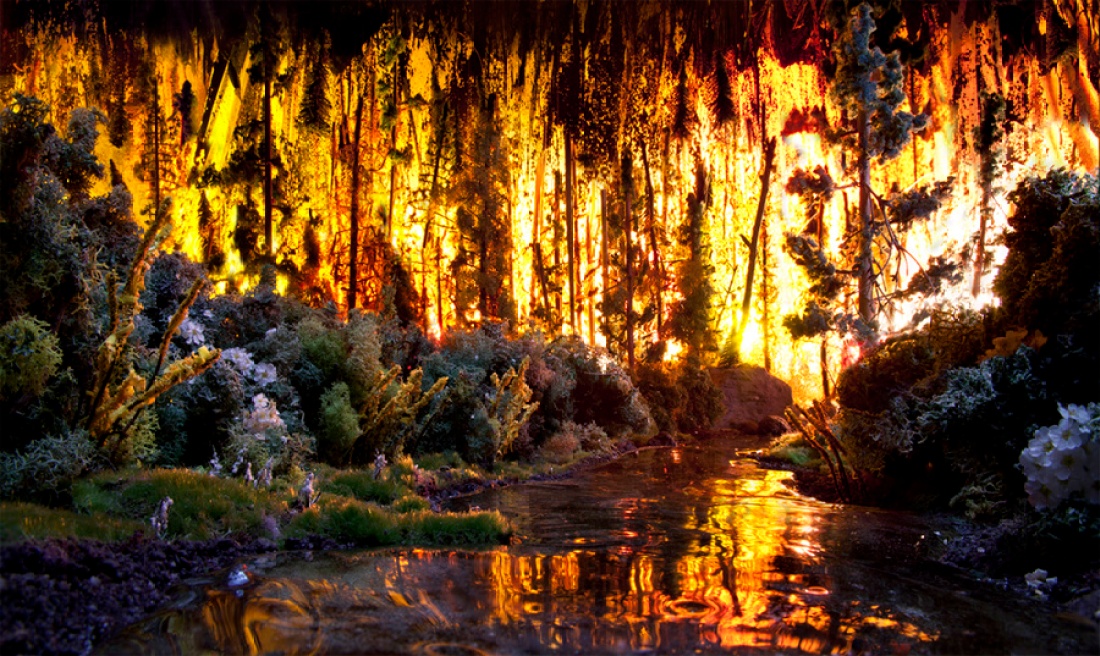 “Carl Jung wrote that our ‘projections change the world into the replica of one’s own unknown face.’ Matthew Albanese’s strange worlds serve two masters: they are projections of the artist’s unknown face, but also of our own.” David Revere McFadden (Chief Curator and Vice President for Programs and Collections at the Museum of Arts & Design in New York City)

There are model makers out there and there are illusionists. The model makers have their local clubs and competitions. Like the local chapter of the IPMS I’m a member of. Some of the finest model makers in the nation are members of the famous Rickenbacker (Columbus) Chapter of the IPMS. A number of national leaders of IPMS are members of the Columbus Chapter. Some of the finest models are created by members of this chapter. Each month is a meeting of the chapter and competition based on some topic or theme. Most of the models on the table for the monthly meetings and contests are historical models of some sort. There is much historical knowledge within club members.

They have made intense studies of such events of history like the world wars or the American wars and created models from this period of time. Most of the modelers are over 60 and still remember these old periods of time. And it is good that they remember them by creating amazing models from these periods of time.  There is a scattering of younger guys in the chapter but attention has been mostly on model kits and how well they could be produced by one of the club modelers. I would study the models on the table each month at our club meetings. I had never seen detail like this and perfectly painted models that looked so realistic.

So, the diorama model I entered in competition looked pretty much out of place. It was like that wrong house on the wrong street that stuck out from the others on the street like – you know – a sore thumb. The other modelers and the contest judges looked over my various dioramas with serious looks. Few times they got any of the humor I was trying to instill with various dioramas. Not only was I creating that orphaned child of the model industry called a diorama, but I was also offering some story involving some social critique or criticism. I offered up my “Deep State” diorama, my “Giant Pea Spill” diorama, my “Chasing Bullitt” diorama and “Desert Patriot.” A few of them placed third or so in a contest but my models didn’t do well in the contests.

The IPMS was an introduction to the great plastic model makers out there but I always had something behind all of this, driving me. It wasn’t that I was looking for some hobby to occupy time. Rather, I seemed to be bringing a lot of my interests together into one type of art-form. My growing up in Los Angeles and my interest in movies and screenwriting. My lifelong interest in writing. My photography and image experimentation. My interest in music and recordings I had made in my home studio. My love of model making when I was young. My sense of humor and sarcasm and desire to offer some type of cultural critique. My expertise in symbolism cultural critique.

This strange little mixture of arts and crafts called creating dioramas or small scenes seemed to be pulling in some new direction and I ended up blogging about this here on Midnight Oil since January of 2018, when I first started making dioramas. During this time, most of these posts have been about dioramas of some sort. I learned about them from the great diorama sites like Box Dioramas of Jim DeRogatis and Darryl Audette. I learned from a prophet called Sheperd Paine who passed away in 2015. From a man called Ray Anderson and a 1988 book he wrote. Certainly, I’ve learned from the IPMS although I seldom do anything plastic and from a kit that most of the members are engaged in modeling. 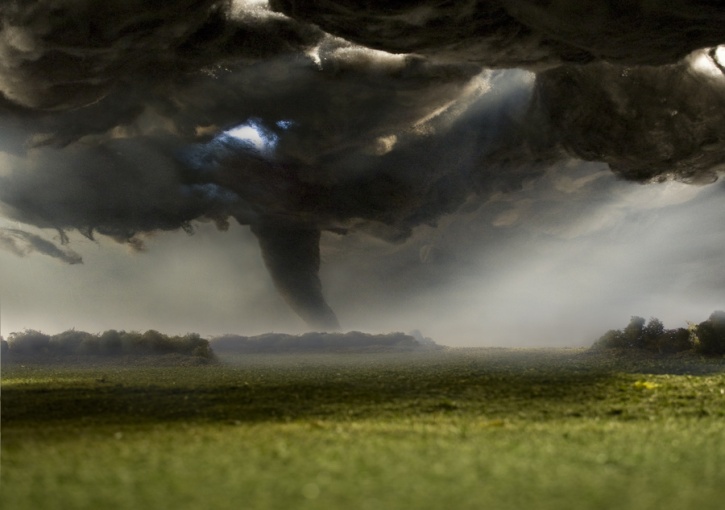 There are model makers and illusionists. The great model makers are the type of people I met in our chapter of the IPMS. But it was illusionists of dioramas such as the Box Diorama site that showed me the boundaries of this art could constantly be expanded. The exploration of this new art form inspired me and showed me the magic and the larger dimensions of this strange new art form that was invading my artistic life. I was almost like the Hunter Thompson type of journalist documenting this strange voyage over Midnight Oil posts since January 2018. Most on dioramas and our expanding inventory and thinking about them.

The Box diorama makers are much concerned with the creation of figures for their box dioramas. Many members whose beautiful, instructive works are on this site, offer in progress photos on how their magic little scene was created. It is somewhat like being back stage at some magic or illusionist performance.

There have been a few out of the box dioramists like Lori Nix who creates incredible post-apocalyptic models, photographs them and then destroys them. There is also some incredible modeling from other nations other than America. It seems that the world is having a type of renaissance in this art-form evidenced by some of the incredible European and Eastern diorama websites.

Yet this new artform, there is one person who holds the title as a master illusionist of the outdoors. Not the interior scenes of character-heavy box dioramas but rather exterior scenes that an artist like Bierstadt might have created if he was a dioramist.  Matthew Albanese is a magician of creating and capturing amazing scenes with brilliant photographic techniques learned in his degree in photography and his work in the fashion industry. He is a modern creator of perhaps the most dramatic scenes one could imagine in nature. All types of phenomena are examined by Albanese. Much of his inspiration seems based on the grand ideas about the environment by visionaries like John Muir or Ralph Waldo Emerson. His brilliant scenes are always under various attacks of natural phenomena like sunsets, storms, volcanos, tropical islands, the planet Mars, the Moon, a train wreck in the middle of the night. It is that topic relentlessly pursued by the “eyes” of the National Geographic photographers. The art of Albanese is the greatest art. It is not an art created at particular places (like a film). Rather, it is particular places made into art. This makes all the difference in the world. 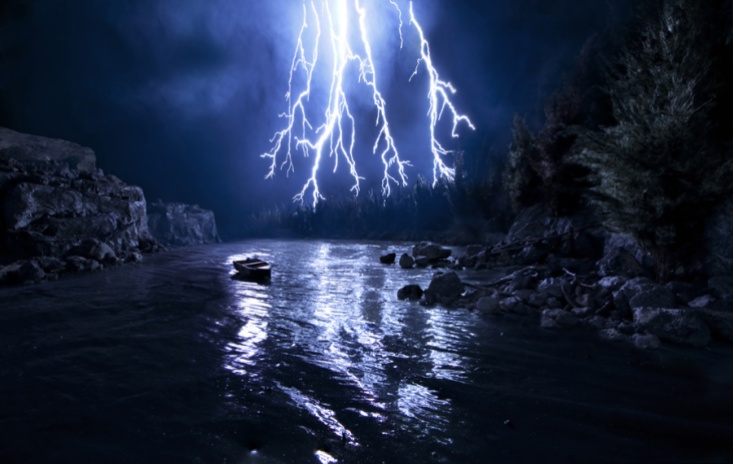 The regret is that the brilliant Strange Worlds art book has yet to be really discovered to this day. A regret but not all that surprising given the shallow depth of modern culture and the shallow, false images it concerns itself with. Within the area of so-called art books, Strange Worlds stands as one of the great ones of all time. Accomplishing all a book of this size could do and accomplishing this in a powerful manner.

I think it will eventually be considered one of the most important art books of art experimentation. The journey of Albanese – a brief glimpse the reader is given in this brilliant book – is such a hybrid journey of an artist, into a  Frontierland yet unclaimed by other artists or schools of art. Maybe it is a new niche in the art world he has created? He has little interest in this. He continues to push his art further into new areas.

In the end, perhaps it is a type of niche that he has created. An environmental illusionist is one definition that comes to mind. Showing us much of the power of nature but also sometimes the other side of nature. The two dichotomies are represented in the photographs “A New Life 1” and “A New Life 2.” The former is photographed in color. The later in black and white. There is a huge contrast between the two images as the artist wants to show us both sides of the world, from nothing more than different times. Not just on the level of a brilliantly photographed model. A true visionary artist I’ve been fortunate to come across in the shallowness of current culture. 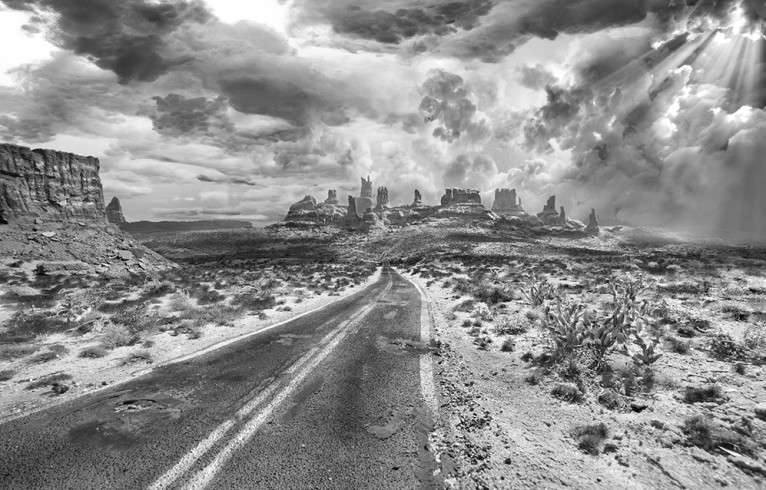 Recently, the book went on Amazon. The price on Amazon is $55 but the book can be found in less expensive online places if one looks around a little.

But even at $55 the book is such a deal offering readers a view into the mind of one of the world’s visionary artists. This type of access to the creative mind of an artist is seldom offered up by the artist. Albanese is more than willing to offer up comments on his ideas and models in progress. This access is priceless as the book is full of such unadorned wisdom about the world. Amazing in itself that all of this is possessed by a person in his mid-30s.

The book is gorgeously designed with some of the most innovative typesetting I’ve yet to see in a book. Leave it to the Italians for creating beautiful books impossible to obtain in America. The printing is superb and the photographs spectacular. A brilliant short essay by David Revere McFadden (Chief Curator and Vice President for Programs and Collections at the Museum of Arts & Design in New York City) begins the voyage to the art of Matthew Albanese. The book contains a useful and fascinating Backstage section where Albanese provides background on the creation of his various visionary scenes. The elements he uses to create his scenes are listed in this section. They comprise an amazing mix of substances such as phosphorescent ink, sifted coffee, chili powder, paprika, cinnamon, yellow glitter, cooked sugar, moss and red, orange and yellow party bulbs. At the end of the book is a fascinating Periodic Table of Strange Worlds showing the wide range of manufactured and natural elements, foods and tools used to create the artist’s models and photographs. 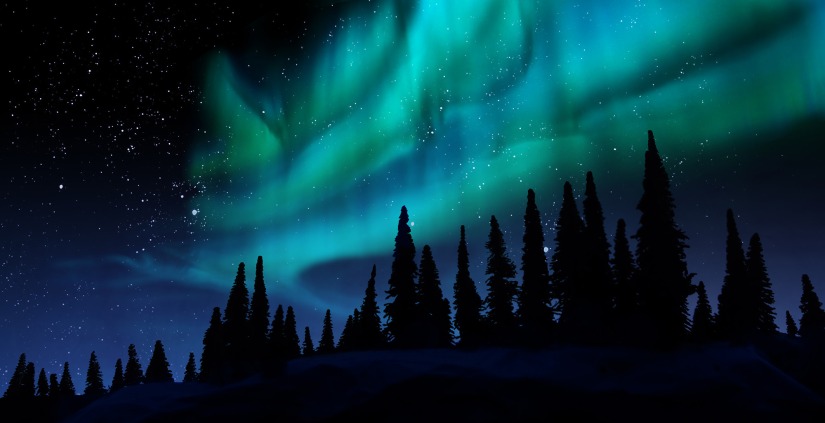 It holds one of the great artists of the modern world. More than a dioramist. Albanese started as a photographer and his work has shown this first art form for him. He works are inspired like the art of Shep Paine. Yet Albanese has no figures in his scenes like Sheperd Paine always had. Seldom are Albanese’s scenes inside like much of the Box Dioramists. Inside various rooms. Most of Albanese’s scenes are outside. It is in the outside world where Albanese can observe the changes in mother nature and her weather. Yosemite before a great storm in a recreation of an iconic scene of Yosemite already burned into a lot of memories. 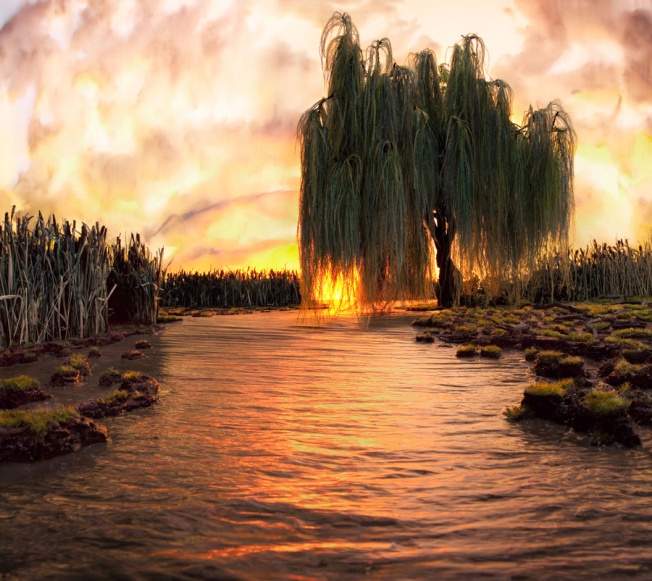 This brilliant art book Strange Worldson the art of Matthew Albanese from Italy’s Lazy Dog Press is a gem. Something seldom found today. Of course, beautiful art like this has seen publication abroad and one needs to buy a foreign published book to witness what I have witnessed in this incredible book.

There could not be a better way of presenting the brilliant art of Matthew Albanese to the general populace. They would certainly be aware of it in the few modeling contests it is entered in. Lazy Dog Press has introduced a grand artist to the world. More than a model maker. Rather, a type of master illusionist. Using not just model-making skills but also his amazing photographic skills. The brilliant illusions he created are captured in the pages of Strange Worlds. Perhaps no other artist has been able to express the forces and moods of nature like Albanese

I could provide a lot of the background on this incredible new artist. But it seems more appropriate to let the artist speak to you with his images and words from his own website below. 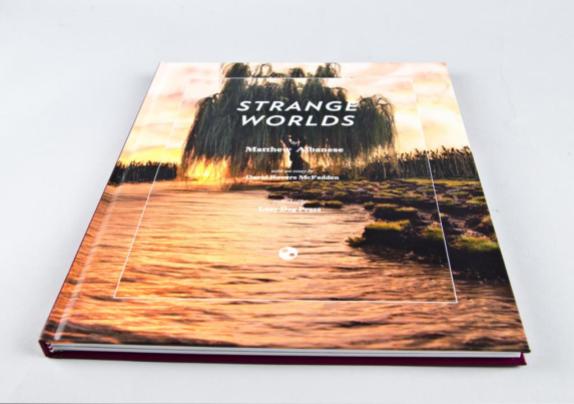